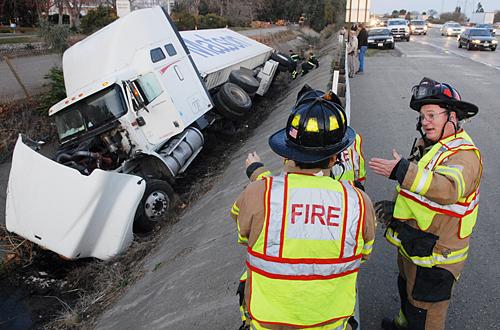 A malfunctioning truck travelling through western Nebraska led to five deaths and one arrest last weekend. Mechanical problems sidelined a truck on Interstate 80 near the Wyoming border. As the truck was sitting idle, a tractor-trailer crashed into the truck and then, two miles down the road, a second semi-truck crashed into a Ford Mustang that had stopped because of the accident. The driver of the tractor-trailer that crashed into the idle truck died in the accident.

The driver of the second tractor-trailer that crashed into the stopped car faces four manslaughter charges. Due to the force of the initial impact, the Mustang was pushed forward into a Toyota Corolla, which was then forced under the back bumper of the semi-truck sitting in front of it. The driver of Mustang, the driver of the Corolla and two juvenile passengers riding the in Corolla perished in the accident. Witnesses on scene and an accident reconstructionist who surveyed the scene stated that the tractor-trailer driver did not slow down or exercise caution before his trailer crashed into the Mustang.

Interstate 80 remained closed for fourteen hours on Sunday while officers investigated the scene. The driver of the second-tractor trailer faces a number of charges, including four counts of manslaughter, which is a felony, and one count of careless driving, which is a misdemeanor. He is being held on a one million dollar bond. According to those on scene, the truck driver was “shivering and shaking, and appeared to be in shock after the accident.” It is not clear if the driver has legal representation.

Reckless driving is one of the main causes of roadway deaths in South Florida. Cell phones and other passengers often distract drivers and when drivers fail to exercise caution, the results can be deadly. If you or your loved has been injured in a car accident due to another’s careless driving, contact the Coral Gables automobile accident attorneys at the Friedland | Carmona today! As expert insurance litigation lawyers, the Fort Lauderdale motor vehicle accident lawyers have dedicated their careers to helping victims recover compensation for their injuries. If you’ve been hurt because of another, call (305) 661-2008 today for your free consultation! Don’t hesitate.