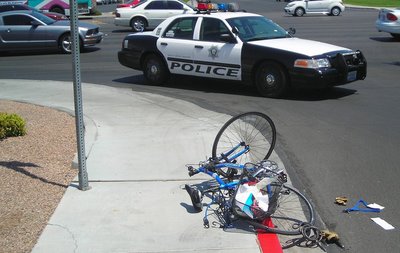 Avid cyclist Thomas Jennings was on his normal morning ride when a car on Fontainebleau Boulevard in Northwest Miami Dade struck him. The driver of the car crossed over from the opposite side of the road and T-boned Jennings. Fortunately, Jennings was wearing a helmet, to which he credits for saving his life.

Jennings injuries required multiple surgeries and over two hundred staples. These days, stitches, staples, metal rods and plates hold this former work out fanatic together while he lays in his hospital bed at Kendall Regional Trauma Center. Jennings’ knee was completely shattered by the accident–as Jennings describes it, “the right knee kind of exploded on impact.” While he was recovering from surgery, Jennings turned on the television to learn that a fellow cyclist, Aaron Cohen, was killed in a hit and run accident on the same day as he was injured.

Jennings’ life has been dramatically changed as a result of the accident. As a self-employed father of three young children, Jennings is the main supporter of his family, Jennings says the accident has changed his outlook and has made him thankful just to “be here.” Following the accident, Jennings’ only request is that drivers follow the rules of the road and give cyclists the required three feet of space. The Miami-Dade police ticketed the driver who T-boned Jennings, for violating the right of way and are still investigating the incident.