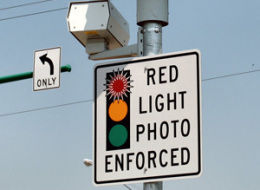 On July 1st, 2010, the state of Florida passed a law which allows red-light cameras to be installed at intersections throughout Florida. These red-light cameras have been inserted in Miami, North Miami, Hallandale, Ft. Lauderdale, West Palm Beach and various other locations throughout South Florida. The red-light cameras have been giving a lot of South Florida drivers traffic tickets. Carol Moss received a traffic ticket from one of these red-light cameras in Hallandale, Florida. She was cited for making a right turn on a red light in Hallandale Beach Boulevard and U.S. 1. Ms. Moss claims she came to a complete stop prior to making her right hand turn and has evidence in the photographs from the camera. Nonetheless, when she was in front of the magistrate she was found guilty of taking the red stop.

Residents in Miami-Dade, Broward and Palm Beach County have been recipients of these red-light camera traffic tickets. South Florida opponents of the traffic tickets claim that the red-light cameras have changed the customary U.S. judicial system presumption of innocent until proven guilty. These critics believe that a machine should not be able to detect traffic violations.

If someone wanted to fight their traffic ticket given by a Miami, Broward or Palm Beach red-light camera they can appeal it in front of a special magistrate. However, hundreds of drivers have refused to bring forth an appeal because they do not believe they can win their case against this technology. Also, by appealing these red-light cameras one would incur additional court costs if they were to lose their appeal. The evidence provided from one of these red-light cameras would include a video showing the traffic violation. This video would be shown to the special magistrate if you would appeal your ticket in Miami, Broward or Palm Beach.

The state of Florida inserted these red-light cameras in order to protect the public safety for the citizens of Florida. Miami, Hialeah, Kendall and South Florida in general all have a high rate of car accidents. The Florida legislature passed this law with the intention of lowering the number of car, truck, motorcycle and bike accidents. The verdict is still out on whether or not this will help lower the number of car accidents in the tri-county area of Miami Dade, Broward and Palm Beach County. I recently noticed that the city of Coral Gables and Miami Gardens installed red-light cameras.

The Miami personal injury lawyers at the Friedland | Carmona have over 20 years of combined experience in handling South Florida car, truck, motorcycle, boat and bike accidents. We can assist you and your family immediately as we have served those in and around Miami-Dade and Broward County including Miami, Aventura, Ft. Lauderdale, Parkland, Coral Springs, Pembroke Pines and Margate. Please call our office at (305) 661-2008 today for a free consultation.